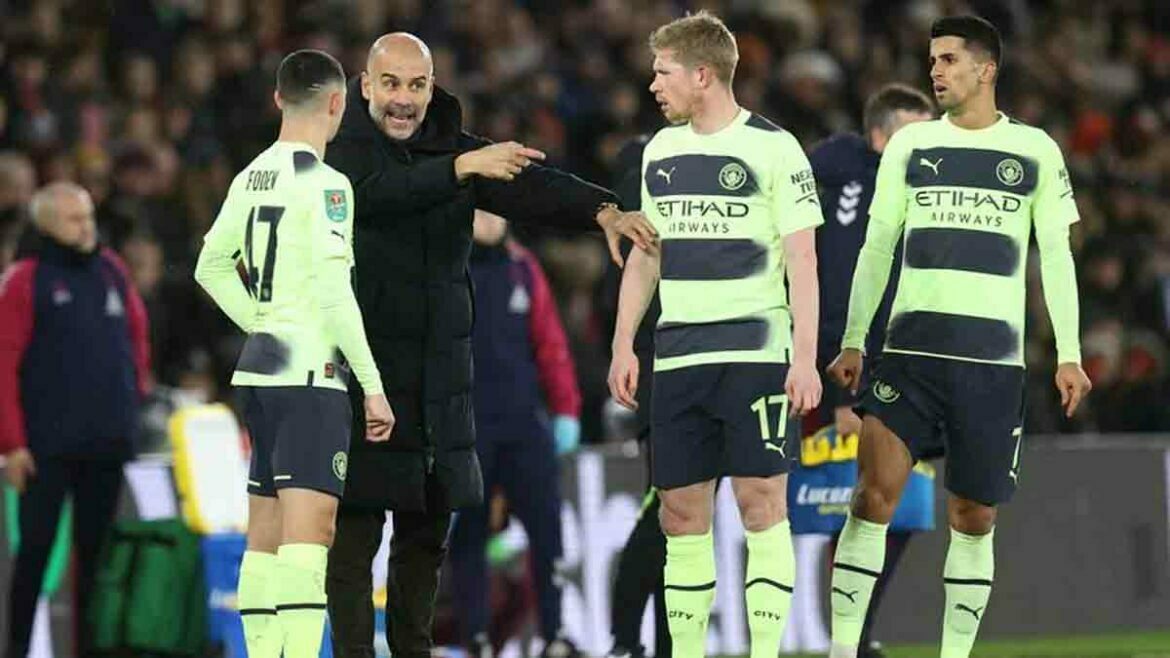 Pep Guardiola vowed to change opinions from ‘PEP OUT’ TO ‘PEP IN’ as he took responsibility for Manchester City’s dip in form.

The Premier League champions have dropped points at home to Everton and away to United since domestic football resumed after the World Cup, while also crashing out of the Carabao Cup with a miserable performance at Southampton. Their performances have been stickier for longer, leading more to question whether the Blues can find enough consistency to challenge Arsenal and – more unpalatable for them – United for the title.

Guardiola remains firmly up for fighting for the three competitions they can win this season as he took the blame for recent tactical or selection decisions that have had an adverse impact on the team. And the Catalan also reaffirmed his commitment to staying at the club, with his contract extended back in November until 2025.

“Sometimes I didn’t choose properly the players or maybe the way, it depends on the way we defend, the way we have to do, and this is the only concern,” he said.

“I like the challenge because it makes me feel I have to come back again and have to find something to help the team get better because I am the man responsible. When the players don’t play good and they have the desire to do it, it’s because there is something wrong in my decisions and I have to find it – because here people don’t wait, people don’t live off memories about how good we were.

“When I will die, people will talk after about good Pep was, that’s for sure but since we are here people expect us to perform well, win games, and try to find the win. Otherwise, ‘Pep out’ – this is how our job is.

With Tottenham – one of Guardiola’s biggest bogey teams – at home on Thursday followed by another home game against a miserly Wolves defence, this week could point towards how City will emerge in the title race. Arsenal could kick off against United with their lead reduced to two points, or with further opportunities to make gains on the Blues.

In his first extensive press conference since defeat in a controversial Manchester derby, Guardiola downplayed the idea that the issues at City are too deep or widespread to be solved. The manager was obviously adamant that it may not guarantee silverware, but he dismissed suggestions that his team of champions have dropped in attitude or intensity.

“The fact that I think I know what we have to do doesn’t mean that it’s going to happen. I want to fight for all the titles, for the Premier League, there are 60 points to play for, many tough games for everyone, so we are going to fight,” said Guardiola.

“The mentality? It’s not about that. You see the game against United, or Chelsea, or the others tough games – we behave really well. When we lose a game there is always a tendency to say ‘ah we didn’t run, it’s about the mentality’, or we didn’t fight.

“Against Southampton we did not do really well that process. And after if you believe you don’t have the right mentality or don’t care, it will be easy for me to say guys you don’t run, but you know they want it. They want to perform well.”